During its centuries-long history, Sofia has been supplied with water from Vitosha. Because of rapid population growth, the city faced a water crisis in the early twentieth century. It was resoluted by engineer Ivan Ivanov. In 1924-1933 he designed and led the construction of a long water pipeline from Rila. On 23.IV.1933 the citizens were solemnly welcoming the crystal clean water.

The Rila Water Supply was the first of its kind on the Balkan Peninsula. It was 82 km long and was highly rated in the reviews of the foreign press. Sofia received one of the best quality and cheap waters in Europe. In 1934, engineer Ivan Ivanov was elected as mayor of Sofia and a member of the Bulgarian Academy of Sciences. 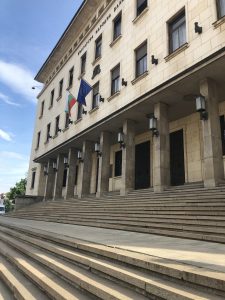 During Ivan Ivanov’s term of office the first general urban plan of Sofia was established, modern fire protection and cleaning service as well, the tram network was extended, the first trolleybus was launched, new schools, nurseries, hospitals, municipal dwellings, a swimming pool in the Borisova garden and others were built.

After the communist regime came to power, engineer Ivan Ivanov was sentenced to a life-threatening prison as a former mayor of Sofia. He was assigned designer work in the prison. Later, he was pardoned and used as a specialist. His house was taken away. He was allowed to return to his home in 1964 a year before his death.