The Church of St Petka Samardzijska was built in the 11th century. Bulgaria was then under Byzantine domination. The church was active during the Second Bulgarian Kingdom and during the Ottoman period.

The church is painted on two layers dating back to the end of the 14th century and at the end of the 15th / beginning of the 16th century. According to most scientists, the upper layer is the work of the great Bulgarian icon painter St. Pimen Zografski. 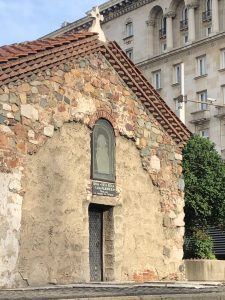 In the early 1950s, the Communist Party undertook major changes in the center of Sofia. The church finds itself in the middle of a new square.

They tried to overwhelm it, but the roof continued to stick over the ground. They decided to demolish it and gathered brigade workers. The night before the demolition of the temple several workers dreamed of the same dream. “You can put a stone here, but you cannot get one out!” – said a voice in the dream. They were embarrassed. One of the workers, however, took a kink and started to ruin. And as he swung, he stoned. Sofia people still tell stories about the fallen worker.

The church is preserved but remains closed until the early 1990s. In this period, the iconostasis disappeared. 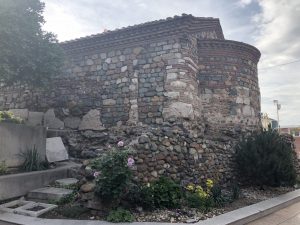