The history of the Sofia tram starts at January 1  1901. The tram started from the Central Station and reached the crossroads of the streets “Graf Ignatiev” and “Patriarch Evtimii”.

Then the tramway network was one single-line. The cars met and diverged in short deviations. The wagon platforms were open without a roof. There were first and second classes. The first class was hurriedly removed because of the boyatty of the Sofia citizens. There were also stops, but the tram also stopped after passenger’s request.

The citizens had only known horse-drawn trams had met the innovation. They were not quite sure about his safety. 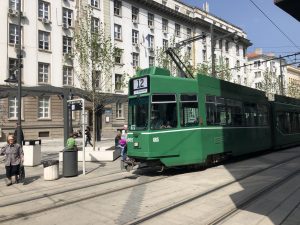 The tram became the subject of jokes:

“The tram looks like love – it can get you in a quick hand if you do not open your eyes.”

“Divorce is a tram accident, where either the tram or the trailer has sprung from the rails.”

“Do not run after a woman and a tram! If you miss them, stand and wait patiently! Another will come is a short time.”