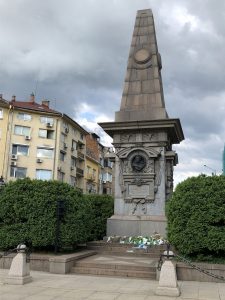 Levski traveled through the Bulgarian lands in the Ottoman Empire and created a network of revolutionary committees. The committees had statutes, secret mail and secret police. They had to arm and prepare the nation for a nationwide uprising. Levski believed that Bulgarians should win their freedom on their own. And to rise when they are ready.

Levski was elusive until December 1872, when he was captured by the Turkish authorities. On February 18, 1873, he was hanged in the vicinity of Sofia.

The monument of Vasil Levski is erected near the place of his gallows. It was opened in 1895 on a project by the Czech architect Antonin Kolar.

Levski is perhaps the only undisputed national hero of Bulgaria. He is revered by the Bulgarians as a saint. Every year, on 19 February, the Sofia citizens and their children flock to the monument. They are not organized by anyone. After the children grew up they will bring  their children to put a flower in front of the monument to the Apostle.