The monument of the unknown warrior is a symbolic tomb of all known and unknown Bulgarian warriors fallen in the struggles for the liberation, union and protection of Bulgaria.

The monument was erected in the 30s of the twentieth century on the project of the great Bulgarian sculptor Andrey Nikolov – a lion laid on a monumental granite sarcophagus. On the sarcophagus there were bas-reliefs of grieving women from the lands left outside Bulgaria.

The monument was “cleaned up” in the Communist regime. Swedish polished granite “with a large crystal and a special black and green color” was used for the sarcophagus in the mausoleum of Communist leader Georgi Dimitrov.

However, Andrey Nikolov’s four-month lion was difficult to be moved. It was originally taken to a village near Sofia and  in the 1950s was moved to the river Iskar. The fishermen still remember it – along the poplars of the river bank. Later, it was set on the road to Plovdiv. In the construction of a highway, his tracks were lost. In the mid-70s it was accidentally found in a camping near Sofia. It was then taken to the Military History Museum. 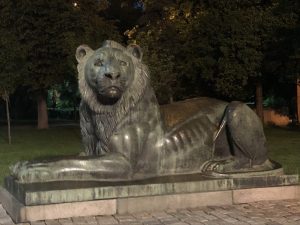 In 1981 a new Monument of the Unknown Warrior was built. The lion was returned to his place. But according to the patriotic citizens of Sofia, it was put to the side, almost on the grass, and does not occupy its central place in the monument.