Saint Nedelya Church is a cathedral temple of the Sofia Metropolitan Cathedral. It was consecrated in 1867. The iconostasis was made by the carver Anton Stanishev – a descendant of the Debar Art School. Part of the iconostasis icons are painted by the renowned Renaissance painter Stanislav Dospevski. At the end of the XIX century, the temple was renovated by architect Nikola Lazarov. 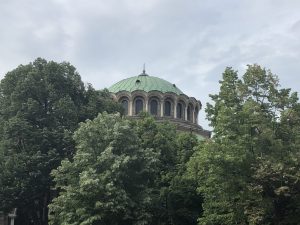 On April 14, 1925, Communist Party officials killed a Bulgarian general. It was expected that the political elite of Bulgaria will be present.

On April 16, 1925, the temple of St. Nedelya was overflowing. There were all ministers, many generals and officers, state and political figures. The burial service led the Metropolitan of Sofia when a powerful blast destroyed the church’s roof. 193 people were killed with children among them.

The bloody attack was done by the Communist Party with participation of the Comintern in Moscow. This is the biggest terrorist act of that time in the world.

The church of Saint Nedelya was restored by architect Nikola Lazarov, changed significantly in the dome. The two-row gold-plated iconostasis survived and were returned to their places. 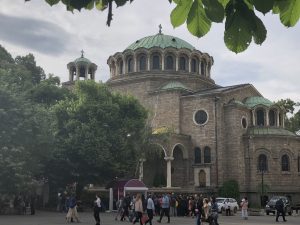