At this place during the communist regime was a  monument of Lenin. It was abolished in 1991.

Authors of the statue of Sofia are the famous Bulgarian sculptor Georgi Chapkanov and architect Stanislav Konstantinov. It was commissioned by the Sofia Municipality as a monument to Hagia Sophia. The monument weighs over five tonnes and is assembled for only three days at Christmas in 2000.

The head of the woman is crowned with the crown of the ancient Greek Goddess of Destiny and the patron saint of the city. The crown has the form of a fortress. The woman holds a laurel wreath in her right hand and antic coins on her left. An owl perched on her left elbow. 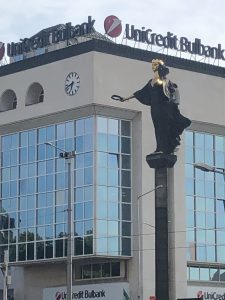 The monument is met with surprise by the citizens of Sofia. They expect to see Hagia Sophia, not a pagan goddess. The Bulgarian Orthodox Church opposes the figure to be called the saint. And the author Georgi Chapkanov states that the monument belongs to Sofia and not to the Christian church.

Obviously, the assessment of the monument belongs to the future.