The Synodal Palace is the seat of the Holy Synod (the collective body of the Bulgarian Orthodox Church).

It was built in 1904 – 1912 by architects Petko Momchilov and Yordan Milanov. The rich polychrome glazed tiling was made by the artists Haralampi Tachev and Mr. Zhelyazkov. 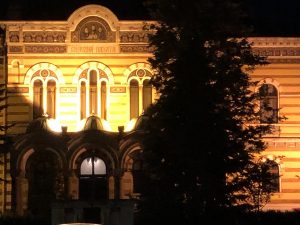 Above the main entrance is a magnificent mosaic. It is 2 meters high and is 4 meters long. Made in Germany. It depicts the archbishops Ilarion Makariopolski, Avksentiy Veleshki and Paisii Plovdivski – leading names in the struggle of the Bulgarian people for church independence in the 19th century.

In 1767, the Greek Patriarchate in Constantinople closed the Archbishopric of Ohrid – the last surviving Bulgarian church institution in the Ottoman Empire. During the first decades of the 19th century, Bulgarians began an ubiquitous struggle for church service in Bulgarian. It grew into a struggle for an independent Bulgarian church and succeeded. In 1870 the Bulgarian Exarchate was established with Sultan’s Firman. Its territory included the then Bulgarian ethnic territory in Macedonia, Thrace and Mizia.