The center of Sofia was covered with yellow pavers in 1907 and 1908. Then mayor Martin Todorov chose the best quality ceramic flooring for the city. It was extremely expensive for that time and 60,000 square meters were covered. 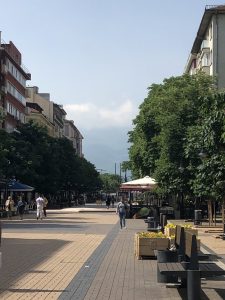 The pavements were imported from Austro-Hungary and for a long time only this was known about them until in the 1960s their secret was revealed. Yellow pavers were made of limestone marble, mined in a mine near Budapest. The mercenary was crushed into powder, molded and baked in special ovens at a temperature of 1300 degrees. It was claimed that in Hungary experiments have been made with limestone from other places, but without result.

Today the yellow pavers are one of the symbols of Sofia. They cover a significantly smaller area than before.