The Sofia Synagogue is the largest synagogue on the Balkan Peninsula. It was built on the design of the Viennese architect Friedrich Gruenanger. He embeds the symbolic number eight for the Jews in the building.

The main sanctuary is octagonal. The number of lamps in the circle of the big chandelier is eight. The main element of the Venetian mosaic floor is an octagonal star. At its center is a flower with eight leaves. 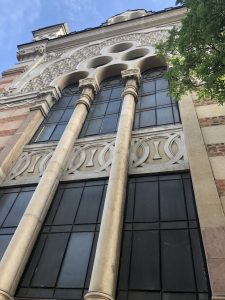 The large chandelier was made in Vienna on a Grünanger project. It weighs 1700 kg. Even the lamps hanging from the balcony are small copies of it.

On 9 September 1909 the shops in Sofia were closed as on a holiday and the citizens welcomed the new temple. On the solemn opening of the Synagogue, King Ferdinand and Queen Eleonora, the Prime Minister and Ministers of the then Cabinet, Sofia Metropolitan and Diplomats, were present.

Years passed. In 1943, on the throne was the son of King Ferdinand – Tsar Boris III. He opposed Hitler’s orders and saved the Bulgarian Jews from the death camps. Not only the king baut also the Bulgarian Church, parliamentarians and the Bulgarian intelligentsia took part in the rescue of the Jews. Bulgaria is the only state in Europe that saveа all its Jews, more than 50,000 people. 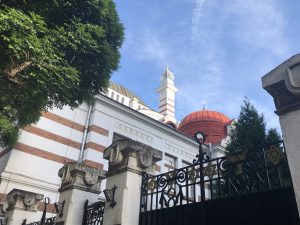